Product Certification from the People who Know Timber Best 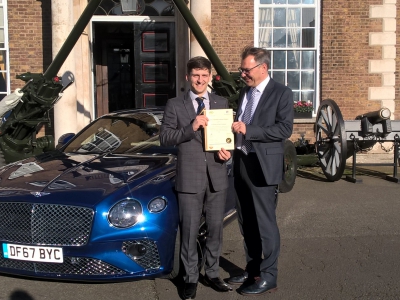 Guests arriving at the London Hardwood Club Annual luncheon, held recently at the historic Honourable Artillery Company, were surprised to see a Sequin Blue Bentley Continental GT parked outside the venue, as attendees are not usually allowed to arrive by car. The exception was made on this unique occasion for Chris Thompson, who works for Bentley Motors; the company having agreed that this very car could appear in a photograph of Chris as he was being presented with his NVQ Level 6 Diploma in Timber Technology by Timber Trade Federation’s Managing Director Dave Hopkins, just prior to the start of the lunch.
Working for Bentley - one of the few brands of hand-built cars still to include both temperate and tropical hardwoods in its manufacture - Chris, a Materials Engineer with a BEng (Hons) from Loughborough, is responsible for the hardwood veneers which feature in the car’s interior. “Our customers, who come to visit us at Crewe from all over the world, are able to choose not only the paint and upholstery colours, but also have the choice of over 7 veneers to feature in their bespoke, luxury car” said Chris. “The veneers need to be kept in a temperature- and humidity-controlled atmosphere, just like fine cigars: and the veneers are carefully sourced from specialist timber traders in Europe, United States of America and the Far East” he went on to say. “From an ecological point of view,” he commented, “some of the more traditional timbers may no longer be used, as they are endangered or cannot be traded for other reasons. The project that I undertook, which led to my qualifying for the Level 6 Diploma, under the guidance of Jim Coulson, Director of the education and training consultancy practice TFT Woodexperts, was to research and test the properties of certain “new” species and veneer-preparation methods which had not been used before. This was to look at potentially replacing some which were no longer available, and to establish their viability and performance when used in the manufacture of the Bentleys produced at the Crewe factory.”

Chris went on to say that he had produced a Technical Essay detailing his findings, which had been assessed by Dr Martin Ansell, Reader in Materials at Bath University; and his success in writing this, resulted in him being awarded his Level 6 Diploma – and Chris is the first person to have achieved this new qualification.  Accredited by Proskills Global, it allows him to apply to be a Member of the Institute of Materials, Minerals and Mining (MIMMM). Dr Ansell remarked, “The scope and content of this research, into the stability and appearance of polymer-coated veneers for automotive applications, was impressive, and has provided an interesting insight into the selection and manufacture of laminated veneers for use in the automotive sector.”

David Howard, President of the London Hardwood Club, commented: “I understand from Chris that his work is continuing into the suitability of the veneers, following on from the initial report; and we are delighted to have the chance to host this important presentation.” He added, “We are also pleased to be able to use the opportunity to highlight the use of timber products in this unusual way, which showcases the craftsmanship and style of one the world’s most prestigious, luxury performance cars; and also to welcome Chris Thompson to our annual Luncheon”

[ Back to News from TFT Woodexperts ]